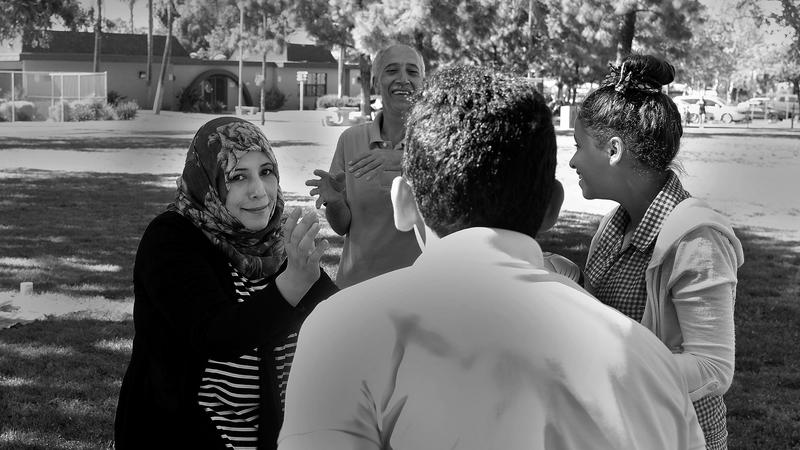 "In the end, it is my firm belief that immigration is not something to fear. We don’t have to wall ourselves off from those who may not look like us right now, or pray like we do, or have a different last name.

Because being an American is about something more than that. What makes us Americans is our shared commitment to an ideal that all of us are created equal, all of us have a chance to make of our lives what we will."

The family of four gathers for dinner each night around 6 p.m. Homemade pizza, tabbouleh and cheesecake were on the menu on a recent weekday. Son and daughter go to school just a few blocks from home, their tattered sneakers and worn backpacks much like those of most teens. Dad works. Mom goes to school.

Inside the family’s modest two-bedroom apartment in an El Cajon complex, where children play in the courtyard and a melody of dialects can be heard, there’s little indication that they were once caught in the crosshairs of a devastating civil war in the Middle East.

Basel Awarek and Sahar Kassab, along with their teenage children Wahib and Laila, are among a handful of Syrian refugee families that have been resettled in San Diego County. As they settle into a new home in America, they’ve found that life is different — but safe.

“I think America is very, very good,” said Kassab in broken English, with the help of her son Wahib, who translated. 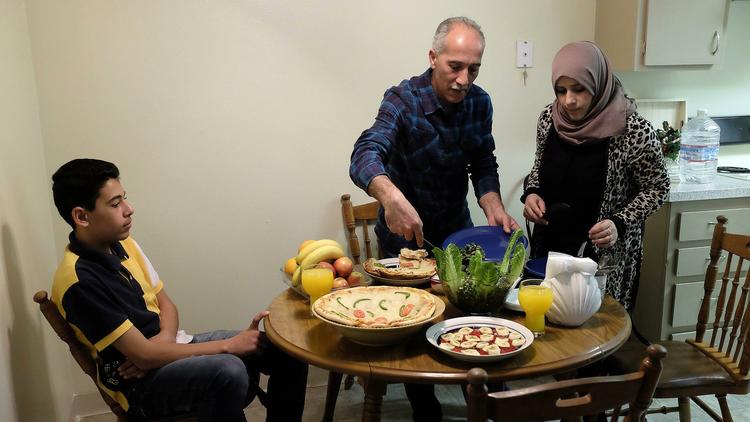 SAN DIEGO_The Awarek family of El Cajon emigrated to the United States after spending four years in Jordan. They live in an apartment in El Cajon and are adjusting to live in the United States by getting jobs, taking classes and enrolling their kids in the local middle school and high school. |Bas

San Diego County has settled the highest number of refugees — as many as 3,000 annually — of any region in California for the past seven years, according to the state’s Department of Social Services’ Refugee Programs Bureau.

Syrians account for only a small portion; 56 Syrians were resettled in San Diego County in fiscal 2015, compared with 14 in 2014, according to the county’s Health and Human Services Agency. An estimated 114 Syrian people — or 28 cases — were settled statewide between October and February, according to the State Department.

Their presence has not been without controversy, with fears being raised that refugee resettlement will leave the United States more vulnerable to terrorism.

Their plight has become more complex after terrorist attacks in Paris, San Bernardino, and now, Brussels, has spread fears that the Islamic State is infiltrating the tens of thousands of refugees pouring out of the Middle East.

Federal officials have been frank about the difficulties of fully screening Syrian refugees.

“I don’t, obviously, put it past the likes of ISIL (or ISIS) to infiltrate operatives among these refugees, so that’s a huge concern of ours,” Director of National Intelligence James Clapper said in September.

“There is risk associated of bringing anybody in from the outside, but especially from a conflict zone like that,” he said. 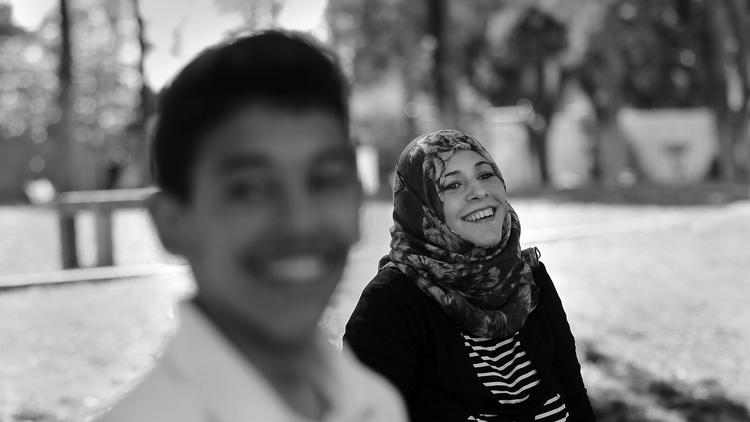 The Syrian conflict began in 2011 with anti-government protests against President Bashar al-Assad. But those protests soon turned into a full-fledged civil war. Militants with the Islamic State have exacerbated the conflict, wiping out entire cities along the way.

There are an estimated 4.3 million registered Syrian refugees displaced around the world as a result, according to the United Nations High Commissioner for Refugees. An additional 6.5 million are internally displaced.

An estimated 369,300 refugees from the Middle East and from Africa will be in need of settlement this year, a need ten times higher than that in 2014, according to the United Nations. This is due largely to the growing needs of Syrians in Egypt, Iraq, Jordan, Lebanon and Turkey.

Bill O’Keefe, vice president for government relations and advocacy for Catholic Relief Services, the humanitarian arm of the Catholic Church, said Syrians are fleeing the very people Americans are afraid of.

“They are people who are fleeing horrific violence. Most of the refugees have moved within Syria a couple of times before deciding they had to leave Syria. And so they’ve been in this long-term process of migration,” he said.

Within a few days of the family’s arrival in Jordan, Kassab got word from family members that her sister died in a bombing in Homs. A video that surfaced online shows a woman whom Kassab identified as her sister, lying dead in a medical room.

She cries at the mention of her sister’s name.

“I left Syria and that was it. Enough. My home was finished, Syria was finished. My sister finished,” she said. “My sister died in a very bad way. I’m very sad and I cry for this. But people must live and continue on.”

At the start of the war in 2011, the family left the historic city of Homs in western Syria. Dubbed “the capital of the revolution,” Homs once possessed substantial economic potential. Today, only a skeleton of the city remains.

The Awareks traveled south to Jordan, a common destination for refugees from the war. Life in their cramped apartment was safe, but expensive. Government aid covered only a small portion of the family’s food intake and rent was high.

In 2015, the family was granted refugee status in the United States. They were flown to San Diego at the end of August. It was their first time on an airplane.

“As they come down the escalator (at the airport) you see people looking nervous, not knowing what to expect. But within a few minutes you see the transformation that comes into their lives,” said Walter Lam, chief executive of the Alliance for African Assistance, one of four agencies in San Diego federally contracted to resettle refugees.

The organization resettled 36 Syrian refugees last year, including the Awareks, according to Lam.

In San Diego, where a melting pot of refugees has formed part of the region’s cultural fabric for decades, the Awareks have found a place where they are free to pursue their piece of the American Dream. 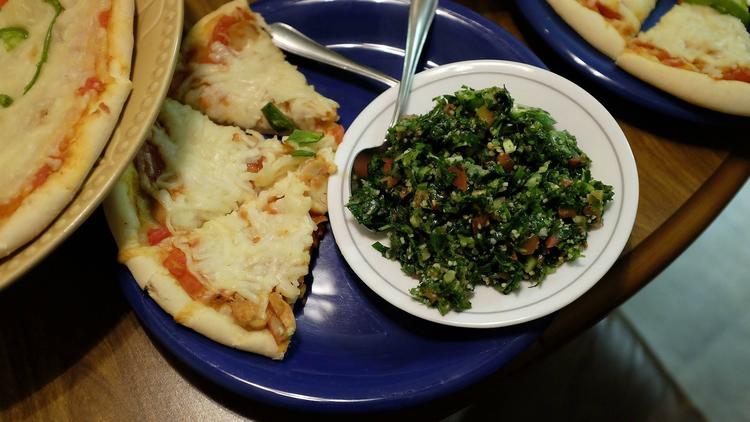 SAN DIEGO_The Awarek family of El Cajon emigrated to the United States after spending four years in Jordan. They live in an apartment in El Cajon and are adjusting to live in the United States by getting jobs, taking classes and enrolling their kids in the local middle school and high school. |The… (San Diego Union-Tribune)

Mother and father take English courses at an adult continuation school five days a week. Awarek, the family’s sole breadwinner, works part-time as a cook at the Gyros House in El Cajon’s Parkway Plaza. Kassab, who dreams of running her own daycare for kids with special needs, has completed coursework and a routine inspection to operate a small daycare out of her home. She’s poised to receive a grant of up to $3,000 from the Alliance for African Assistance to get her started, according to Lam.

As much as her husband is quiet and timid, Kassab is energetic and opinionated. Her drive to succeed is palpable. Working, going to school — or “moving,” as she calls it — isn’t an option.

On a particularly warm spring afternoon, the family took a trip to a neighborhood park. They packed soft drinks and water, bananas, tennis rackets and a soccer ball. They settled into the cool grass, among a string of other families. An ice cream truck idled in the parking lot.

For Awarek, the country’s religious and political freedom is particularly significant.

“There’s no difference between people,” he said.

Asked if they’d return to Syria if the war subsides, Awarek and Kassab answered quickly. No.